About The
Tate Student Center 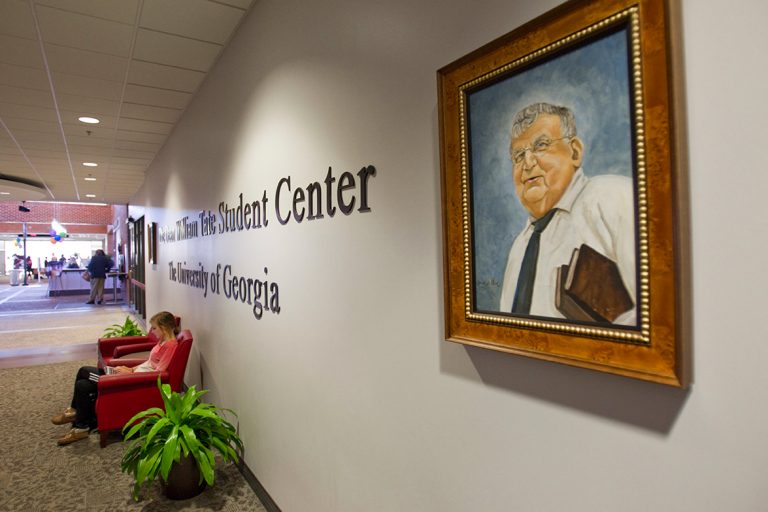 As early as 1946, William Tate, then dean of men at UGA, expressed a need for a new student center, as the number and variety of student activities had outgrown the capacity of the current facility, Memorial Hall. It was 23 years before planning for Phase I of the center would commence and another 12 years of development before the first bits of earth were moved on the site adjacent to Sanford Stadium.

On January 28, 1981, a crowd of administrators, staff, students and visiting dignitaries braved chilly temperatures as UGA President Fred C. Davison led the groundbreaking ceremony. University officials, in consultation with the Board of Regents, decided that the new center would be named in memory of the beloved administrator who had first conceived it. Dean Tate had passed away the year before. On October 20, 1983, the Dean William Tate Student Center was dedicated and officially opened.

The student center was built for the benefit of the entire University community and quickly became the “heart” of student activity on campus as well as the home of the Department of Student Activities (now known as the Department of Campus Life). For nearly three decades, the many programs and services housed within Tate have been designed to meet the social, cultural and recreational needs of UGA’s student body.

The $58-million Tate Student Center Expansion and Renovation project has drastically increased space for student programs and activities. The project has been funded by a $25-per-semester increase in the student activity fee; the increase was approved by the student body via referendum vote during spring semester 2005.

The Tate Student Center Expansion opened its doors to the University community on June 1, 2009. Incoming first-year students and their parents were among the first to see the new facility as part of orientation. On August 20, 2009 UGA President Michael F. Adams led a gathering of faculty, staff, administrators and students in cutting the ribbon, officially dedicating the expanded facility.

With more than 95,000 square feet of additional space, the Tate Expansion features meeting rooms, multiple dining options, numerous lounges and gathering spaces and a 12,000 square-foot multipurpose room for large scale activities and events. Today’s Tate Student Center is among the finest facilities of its kind and will continue to be a point of pride for current and future generations of UGA students.

Dean William Tate
William Tate, UGA’s Dean of Men from 1946 to 1971, was born in Calhoun, Georgia on September 21, 1903. The son of a banker and a Latin instructor, Tate graduated from the Georgia Military Academy (now Woodward Academy) before matriculating at the University of Georgia in 1920. At the time there were 1,024 students taught by a faculty of 48 professors. Tuition was $40 for a year and room and board was $180.

Tate majored in English and history and also studied German, Latin and drama. He received his bachelor’s degree in 1924 and a master’s degree in 1927. Afterward, he spent several summers doing postgraduate work at Harvard, Columbia and the University of Chicago.

As a student at UGA, Tate excelled in both academic pursuits and extracurricular activities. He was president of Phi Kappa Literary Society, the Student Council and Delta Tau Delta, his social fraternity. He was also elected to the honorary societies of Sphinx, Gridiron, the Junior Cabinet (now Blue Key) and the Senior Round Table (now Omicron Delta Kappa).

During his 25 years as Dean of Men, Tate had a reputation for being a kind and compassionate man. He used his own resources as well as his influence with campus and local officials on behalf of both male and female students faced with financial, academic or legal difficulties.

There were many times when Dean Tate’s presence at student gatherings had a sobering effect on tense crowd emotions. In 1961, he walked into a mob outside Myers Hall that was bent on brutalizing Charlayne Hunter, the first African American woman to integrate the campus. As he was pelted with rocks, he calmly assisted a policeman who had been knocked to the ground then moved through the crowd seizing identification cards and remembering names and faces.

In the spring of 1970, when angry students marched on the president’s home to protest the Vietnam War, Tate, wearing love beads, walked to the head of the mob, sat down in the street, and persuaded the students to hold a peaceful demonstration. When one student yelled to him, “Dean Tate, we’re going to be here all night. Are you going to stay with us?” Tate quipped, “When you send out for breakfast make mine two over light.”

Though best known as an administrator, Dean Tate enjoyed teaching immensely and taught history and English during his tenure as Dean of Men. He continued to teach after his retirement and was active in University and community life until his death in 1980.

A central figure and a dominant presence, Dean Tate left an indelible mark of excellence on the University campus. Generations of alumni still carry fond memories of Dean Tate; the Tate Student Center is a lasting testament to his memory