The Center of The Campus Activity

Built in 1832 to replace a temporary wooden structure, the Chapel is one of the most aesthetically pleasing buildings at Georgia. At the time of its construction, at a cost of fifteen thousand dollars, it was the finest building on campus. In the early days, when Protestant orthodoxy dominated the campus, the Chapel was a center of campus activities. A daily religious service, which students were required to attend, was held there, as were assemblies and commencements.

A bell tower originally crowned the roof, but in 1913 it was found to be rotten and was removed. The bell, which rang for chapel, for the beginning and end of class, and in emergencies, was placed at the top of a wooden tower at the back of the Chapel. Now the bell is rung only to mark athletic victories or other special occasions.

The sundial in front of the Chapel marks the site of the famous Toombs Oak. A famous senator and Confederate general, Robert Toombs began his distinguished career by being expelled from the university in 1825. As the story goes, he reappeared at commencement and spoke so eloquently under the oak tree that the audience left the chapel to hear him. The incident, first recounted in a speech by Henry W. Grady (class of 1868), sounds just like the mercurial, impetuous Toombs—but, alas, it never happened. Toombs’ love for the university did cause him to return many times to the campus, however, and he served on the board of trustees from 1859 until his death in 1885.

This excerpt was taken from A Walking Tour of the University of Georgia by F.N. Boney, retired history professor.

After a wagon ride from Central Alabama, two fires and about 130 years of exposure to Southern heat and humidity, the 17-by-23-foot painting in the university’s Chapel, which for a time was said to be the world’s largest framed oil painting, is about to undergo a well-deserved restoration. This summer the “Interior of St. Peter’s Rome” will be cleaned and repaired as part of the recent renovations to the Chapel.

The painting was completed in 1847 by George Cooke for architect and industrialist Daniel Pratt who was building an addition to his home in Prattville, Ala., and wanted the painting to fill one end of it. The gallery became infested with dry rot and had to be torn down to save the house. The painting was given to the university in 1867 because of Pratt’s friendship with the chancellor and at the request of the artist’s widow who eventually married an Athenian. The Chapel was extended to accommodate the enormous work of art.

Some work has been done on the canvas since then, especially after a fire in 1989 destroyed a portion of it. New canvas was woven using a sample of the original, and Walter Frobus, a local restoration specialist, repainted it-darkening the paint so it would match the rest of the smoke-damaged picture.

Now the historic painting will be treated to a total cleaning job. Flaking fragments will be painstakingly reattached and repainting may be needed in some areas. The work is being handled by James Swope of James Swope Fine Arts Conservation Inc. in West Palm Beach, Fla. Several art students have been hired to execute the work under the supervision of Swope’s assistant.

“They’ll be working basically with cotton swabs during 40-hour weeks over a 12-week period during the summer,” says Lynne Perdue, registrar at the Georgia Museum of Art, which serves as “caretaker” of the university’s art holdings. “The painting is attached to sheets of masonite, so we have set up scaffolding.”

Museum staff are working with Swope and the Office of the Vice President for Academic Affairs, which has led the effort to renovate the entire Chapel, including the painting. The walls of the building have been reinforced and air conditioning is now installed, both of which had to be done before work on the painting could begin. State funding for the renovation will pay the approximately $90,000 bill for restoring Cooke’s painting.

“It’s definitely been worth the effort,” says Thomas Bowen, assistant to the vice president for academic affairs. “The painting is valued at roughly a quarter of a million dollars, but it’s irreplaceable. It’s a campus landmark.

WE ARE HERE TO HELP 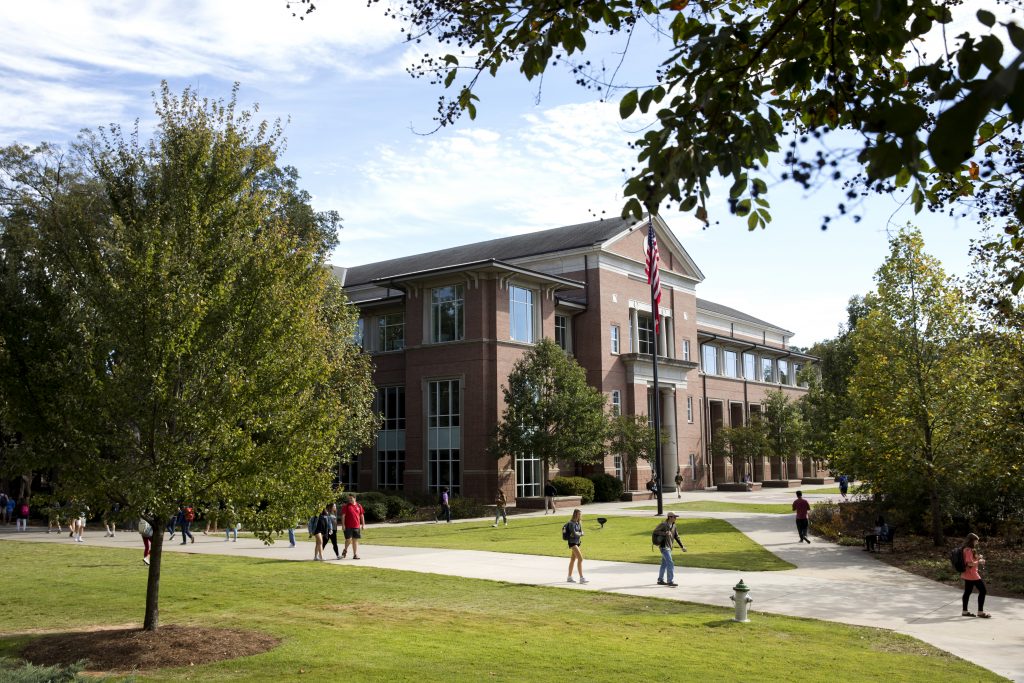